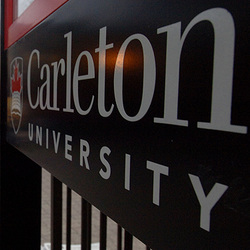 Students Against Israeli Apartheid (SAIA) Carleton is outraged by Carleton University’s
official status as a “proud supporter” of the Jewish National Fund’s 2011 fundraising gala,
as well as President Runte’s direct participation as “honourable co-chair” of the event. The
Jewish National Fund (JNF) is a notorious organization that has assisted in the ethnic cleansing, dispossession and colonization of Palestinian land for over a century.

The JNF’s primary purpose is to “purchase, take on lease or in exchange or otherwise
acquire lands….in the prescribed region [Palestine and the surrounding areas]…for the purpose of settling Jews on such lands."(1) Thus, according to its mandate the 1.2 million Palestinian citizens of Israel are expressly prohibited from renting or purchasing any of the 13% of Israeli land that is owned by the JNF, simply because they are of the “wrong” religion.(2) Furthermore, the JNF frequently boasts about its naturalization projects (such as tree plantings, water conservation, etc), but fails to disclose that these projects are completed upon the remains of demolished Palestinian villages. In other words, its discriminatory practices serve to perpetuate the racist exclusion of Palestinians from the enjoyment of full equality, making the JNF an active contributor to the broader structures of Israeli Apartheid. The JNF also has an active branch within Canada that enables these projects to be completed through its fundraising initiatives. Canada Park was completed with the financial assistance of JNF Canada and was built over the ruins of two Palestinian villages (Yalu and Imwas) that were occupied and ethnically cleansed in 1967.

On numerous occasions, President Roseann Runte has refused to express any degree of support for Palestinian rights, hiding behind the claim that Carleton University and its officials do not wish to “take sides” on the Israeli-Palestinian conflict. Over two years ago, when asked to condemn the deliberate bombing of the Islamic University in Gaza by Israeli Defence Forces during Operation Cast Lead - which killed over 1400 Palestinians - President Runte instead stated in an e-mail to the entire Carleton community, “I also believe that if the president has a personal opinion, he or she should not use the position of president to give it expression and weight. By so doing, it could be implied that this position was one adopted by the institution as a whole”.

However, President Runte apparently has no moral qualms about making Carleton a “proud supporter” of the JNF, whose slogan openly boasts that it is “100% Israel.” This clearly demonstrates the utter hypocrisy of the President’s words, and it is yet another example of the Carleton administration’s shameful disregard for Palestinian rights. The administration has also actively sought to repress and stifle the growing divestment campaign initiated by SAIA Carleton. The campaign calls upon Carleton University to immediately divest from four companies complicit in violations of international law and human rights in the occupied Palestinian territories. The Board of Governors (BoG) has refused to allow SAIA to speak to them about the campaign on numerous occasions, and after a rally that successfully prevented a BoG’s meeting from taking place, the administration employed intimidation tactics and threatened student activists with non-academic penalties if they participated in similar actions in the future.
Carleton’s official support of the JNF fundraising gala implies that Carleton University supports Israel’s apartheid regime and the active colonization of Palestinian land. SAIA finds this to be unacceptable, and demands that Carleton University immediately withdraw its support from the JNF fundraiser, and that President Runte step down as "honorable co-chair." Carleton University has continuously ignored Palestinian human rights, but it now has the opportunity to recognize international law and respect human dignity by rescinding their official support of the JNF.